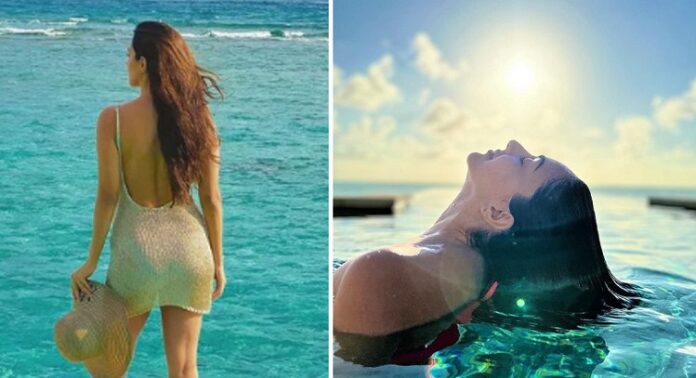 Kiara Advani, who is currently enjoying the success of her recent film Shershaah along side Sidharth Malhotra, posted a video and a photo from her Maldives holiday on Instagram. Kiara and her rumoured lover Sidharth were seen together at the Mumbai airport on New Year’s Eve and rang in the New Year. The couple is said to have rung in the New Year together from the Maldives.

Kiara took to Instagram to share a well-shot video of herself enjoying the sun and the sea in the island nation, with glimpses of dolphins and her lovely self. Kiara shared the video without a description, instead using folded hands and a butterfly emoji.

Read :   As Putin starts his invasion of Ukraine, Biden and the rest of the world call for repercussions

She can be seen in the video relaxing in the sun in a white bikini and swimming in the sea. A mesmerizing sunset backdrop frames the slow motion view of her sprinting on the beach and approaching the camera.

Fans flooded in with fire and love emojis and left multiple comments as soon as she released the video. Within a few hours, the video had over five lakh likes, including one from Sidharth Malhotra and another from her Kabir Singh co-star Shahid Kapoor.

Many of her fans praised her in the comments section, calling her “lovely,” while others sought to catch a peek of Sidharth in the video. “Siddharth kaha hai (where is Sidharth?)” remarked one fan, while “Sidharth k foot prints hain waha pahle se (Sidharth’s foot marks are already there on the sand)” said another. “Post the images that you have taken with Sid,” wrote another.

Read :   Justice Stephen Breyer of the United States Supreme Court is about to retire

Meanwhile, on January 16, ace designer Manish Malhotra posted photos of Sidharth’s birthday celebrations, and Kiara responded. “Joyful happy birthday dearest one,” Kiara wrote beside a heart icon alongside a beautiful photo of them together from the film Shershaah. “Thanks Ki,” Sidharth answered with a heart icon.
Kiara and Sidharth first appeared onscreen in the critically acclaimed film Shershaah in 2021. It was released on Amazon Prime in August of last year, and both critics and audiences praised Sidharth’s outstanding performance. In his biopic, Sidharth played Captain Vikram Batra, and Kiara played his fiancee, Dimple Cheema.

Meanwhile, Kiara Advani is set to star alongside Kartik Aaryan and Tabu in Anees Bazmee’s horror comedy Bhool Bhulaiyaa 2. On March 25, the film will be released in theatres. Kiara will also star alongside Varun Dhawan in Jug Jugg Jeeyo. She recently completed filming for the film’s final schedule. The family comedy drama is directed by Raj Mehta and produced by Karan Johar.

In Lahore, a teen PUBG gamer was arrested for killing

Most Haunted Top 10 Places in India and Their Stories