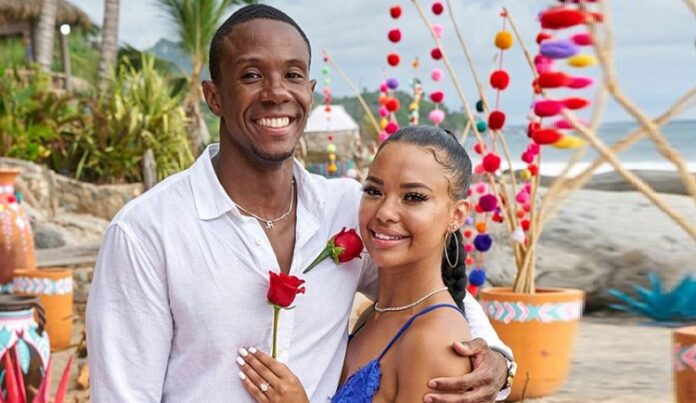 Maurissa Gunn and Riley Christian, who became engaged on the seventh season of ABC dating show Bachelor in Paradise last summer, have broken up. In a joint statement to People on Jan. 24, the former couple acknowledged their breakup.

The statement stated, “We have chosen to go our own ways.” “Never in a million years did we think we’d be here, but we’ve reached a place where we both need to work on ourselves.”

“We’ve loved everyone’s love and support thus far on our journey, and all we ask is that you please respect our privacy while we navigate through this,” they wrote.

“We’ve loved everyone’s love and support thus far on our journey, and all we ask is that you please respect our privacy while we navigate through this,” they wrote.
When they initially met as participants on BIP, they fell hard and fast in love. Although Maurissa had started a romance with Conner Brennan, a suitor from Katie Thurston’s season of The Bachelorette, the reality stars became close after Riley arrived at the tropical set in Mexico.

Read :   Gas prices in the United States are falling as oil prices fall below $100 per barrel

The attorney proposed to the 25-year-old Atlanta native on the show’s season finale, and the two became the first Black couple in BIP franchise history to get engaged. Joe Amabile and Serena Pitt, as well as Kenny Braasch and Mari Pepin, were also engaged. After the conclusion of the season

Riley and Maurissa, who met on season 7 of Bachelor in Paradise in summer 2022, appeared to be embarking on an incredible love tale. Maurissa accepted Riley’s proposal on the beach in Mexico, making them one of three couples to get engaged at the end of the programme. Maurissa and the rest of the cast were shocked when the season finale aired in October.

Read :   In the wake of the Freedom Convoy rallies, Canadian governments are beginning to move away from vaccination regulations

In the months that followed, the two were all over each other’s social media profiles, and they even uploaded images of themselves in identical Christmas pyjamas. However, there were signs of problems just after the holidays.

Riley was essentially removed from Maurissa’s primary Instagram account. She also started posting mysterious comments on her Instagram Story, prompting many to fear she and Riley were no longer together. Riley and Maurissa haven’t been seen on each other’s social media profiles since the holidays.

Mila Kunis and Ashton Kutcher have raised $40 million to support Ukraine’s refugees in a...

Scientists are keeping an eye on a novel omicron subvariant called BA.2.

Russia withdrawal from Ukraine border has not been observed by the United Kingdom, according...