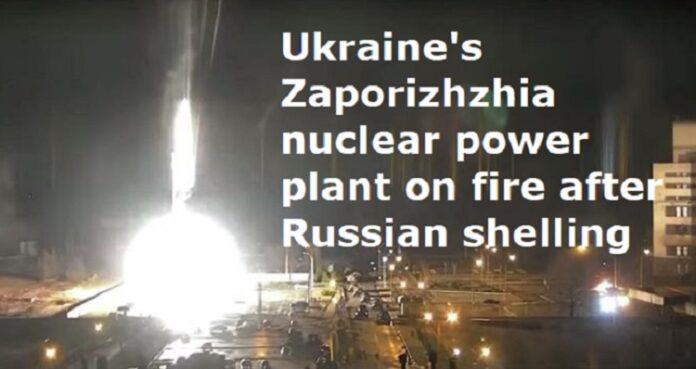 Ukraine’s Zaporizhzhia nuclear power plant, Europe’s largest of its type, caught fire early Friday after being attacked by Russian soldiers, according to the mayor of Energodar, a nearby town.

Local forces and Russian troops have engaged in severe battle, according to Dmytro Orlov, who added that there have been losses but did not provide any specifics.

Russian soldiers had reportedly increased their efforts to take the plant and had entered the town with tanks, according to Ukrainian officials.

Orlov stated this on his Telegram channel, claiming a threat to global security. He didn’t go into much depth.

Reuters was unable to confirm the information immediately, including the severity of any fire.

Ukraine’s invasion is already on its ninth day. Thousands are believed to have killed or been injured as the greatest attack on a European state since WWII unfolds, resulting in 1 million refugees, economic losses for Russia, and worries of a larger confrontation in the West not seen in decades.

Russia has already taken control of the decommissioned Chernobyl nuclear power plant, which is located around 100 kilometers (62 miles) north of Kyiv, Ukraine’s capital.

Following EU sanctions, the United States and the United Kingdom placed sanctions on more billionaires on Thursday, ratcheting up the pressure on the Kremlin.

Alisher Usmanov, the founder of the mining corporation Metalloinvest, was among the guests.

According to the White House, visa restrictions would be placed on 19 Russian oligarchs, their family members, and allies.

Read :   The State Department has ordered diplomats' families to evacuate the US post in Kyiv because of tensions with Russia

Sanctions have already had a “profound impact,” according to US Vice President Joe Biden.

Russia refers to its actions in Ukraine as a “special operation” aimed at undermining Ukraine’s military strength and apprehending dangerous nationalists. Civilians are not being targeted, it claims.

The battle for Kyiv heats up, and a stubborn Zelenskyy pushes resistance, declaring, “The struggle...